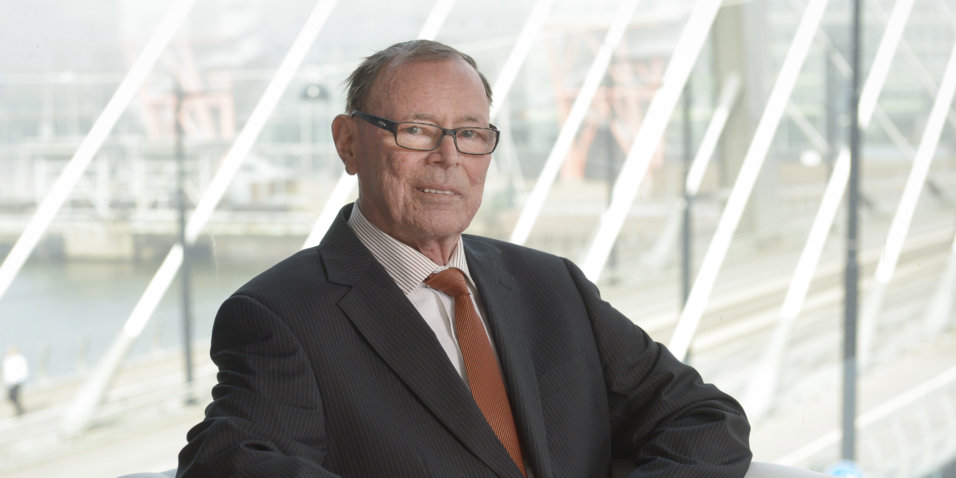 For Olavi “Olli” Lehto, who just celebrated his 78th birthday in late August, coming up with solutions to problems has been a life-long passion. As an entrepreneur, inventor and community builder, Olli has been instrumental in numerous business ventures, an active member of his local city council, and the creator of dozens of companies and innovations. Truly a self-made man, he started life as a war orphan in the Finnish city of Tampere before moving to Helsinki to attend the Helsinki University of Technology in 1954.

Last spring when Olli, an active golfer, began feeling unusually tired he went to his local healthcare center. “I’ve always been very interested in health and how the body works as I’m an engineer by training,” says Olli. His blood work revealed nothing, and he was sent home with some extra vitamin supplements. Then, in July, he became violently ill after eating out.

“My wife took me to a private clinic in Espoo (a suburb of Helsinki), where the doctor carried out an ultrasound and told me that there was something suspicious, possibly cancer, in my pancreas,” says Olli. Although an appointment was booked for a CT scan (computed tomography) a week later, Olli jumped into action.

“When I heard about the possibility of cancer, I decided to take matters in my own hands – I didn’t want to wait a week. I’d heard of Docrates and pretty much drove directly here and was immediately sent for an MRI (magnetic resonance imaging). Then I received the news – this is a bit blunt – it’s pancreatic cancer and there’s nothing that can be done to cure it.”

Despite the shock, Olli says that his experience at Docrates has been very positive and he credits the hospital with giving him some additional time.

“I’m very pleased and grateful that I’ve been able to live this past year,” says Olli, who even played an 18-hole round of golf at Midsummer. “Already last summer we booked tickets for this summer’s ‘La Traviata’ at the Savonlinna Opera Festival (one of the world’s top opera festivals, which takes place in an ancient castle in eastern Finland). As I wasn’t feeling very well last autumn, I wasn’t sure if I’d live to see the opera. And now I’ve been there. Even my relatives have been amazed that I’m in such good shape.”

With an engineer’s precision, Olli has created a color-coded chart where he records all his treatments and medications along with how they have affected his thrombocytes and general level of well-being.

“For me the most important thing has been that Dr Tuomo Alanko, Chief Physician of Medical Oncology, has consistently listened to me and taken my opinions and wishes into consideration. I’ve brought various aspects of how I’m feeling and what I’ve discovered works or doesn’t work to our discussions.  We’ve always found a good compromise. That’s made me very happy,” he says.

His regimen includes Tarceva, a targeted cancer drug that slows down the growth and multiplication of cancer cells, and Gemcitabine, a chemotherapy drug, which is administered via a drip.

“I’m always so happy to come to Docrates,” says Olli. “The nurses feel like close friends. They take care of everything and are very friendly, helpful and knowledgeable. They always have time to discuss things with me and find out additional information that I’m interested in obtaining.

“When I come in for my Gemcitabine drip, I read the daily newspaper Helsingin Sanomat and relax. Even inserting the i.v. catheter is not so bad at all –in practice it’s pain-free. Afterwards I’m given a cortisone injection as pre-medication for chemotherapy. Following that, I feel really good and energetic for couple of days,” he says.

The change of his initial diagnosis from Stage 4 to Stage 3 pancreatic cancer also gave him hope.

“I’ve also been tremendously pleased with my last CT scans: Dr Kaarina Partanen, the chief radiologist at Docrates, has said that the scans reveal no change (which means that the tumor hasn’t spread further). That’s allowed me some hope. I’ve had to learn this science of medicine. Naturally I’m interested in everything related to my case. It’s always interesting to see where things go.”

A pioneer
Charting new territory has been a recurrent theme for Olli, who was instrumental in importing some power stations to Finland, e.g. the main power plant in the Helsinki City. In addition to his work as a businessman, he was an active member in the international community volunteering organization, the Lions, over 30 years. He’s also one of the founders of SKTS, the Finnish Inventors Support Association Foundation. “We’ve invested our own money to start with SKTS. Its central idea is to support and help good innovations by supporting the inventor or innovator. It’s really important to support Finnish innovation, especially in the beginning phase when inventors need all the support they can get,” he says.

The two-time Finnish backgammon champion, who played in the finals of many European backgammon championships, is the father of four adult children. His eldest son, Mika, a banker, bought the Pyhäniemi manor in Hollola a few years ago, and turned one of Western Finland’s most historic estates into an acclaimed cultural venue for music and art.

Olli continues to work on several inventions including a patent on a new method that he says would revolutionize the delivery of prostate cancer and Alzheimer medications.

“I have so many ideas, and I like to keep busy thinking about something concrete. I’ve had time to put my things into order and take care of all the formalities. I’ve been extremely happy with the treatment and help that I’ve received at Docrates,” he says, with a smile.