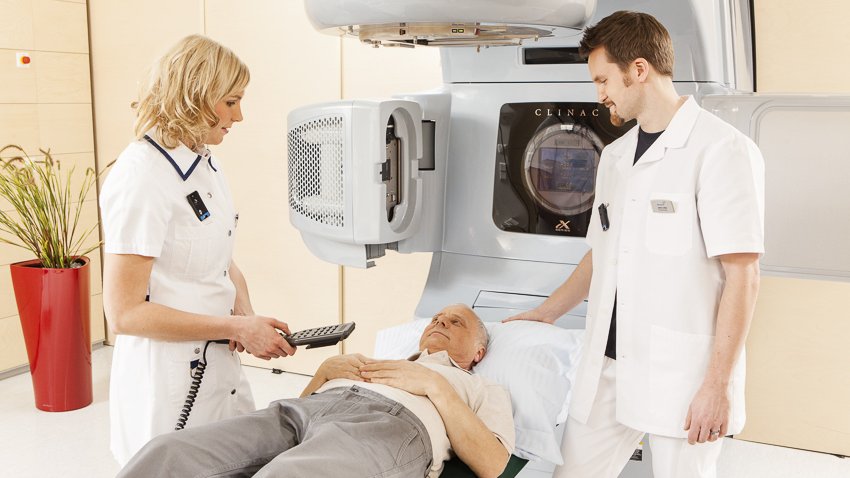 It can occur that, when radiotherapy is administered to the prostate, a risk for secondary cancer emerges. The topic has been discussed in an analysis that was published in 2016 (Wallis et al., 2016) and which summarises 21 separate studies.

When radiotherapy is administered, there is a risk that a secondary cancer emerges. By secondary cancer, we mean here a cancer which may result from radiotherapy. When the prostate is radiated, the closest healthy tissues are the urinary bladder and intestines and, therefore, the concern is whether cancer can especially develop in this area over time.

According to the summary analysis by Wallis and others, there may be a connection between prostate cancer radiotherapy and bladder and colorectal cancers. Therefore, it is estimated in radiation biology that it is possible for unnecessary radiation to cause changes in healthy cells which may then develop into cancer over time. However, the risk for secondary cancer has not been demonstrated in all of the conducted studies.

Even if there is a connection between prostate radiotherapy and secondary cancer, the absolute risk for the development of cancer is very small according to Wallis et al., and the development time for potential cancer is long.

According to Specialist in Medical Oncology and Radiotherapy Timo Joensuu at the Docrates Cancer Center, some of the studies that are included in the analysis have significant deficiencies compared to today’s radiotherapy procedures.

“Most of the radiotherapy techniques under analysis in the study are outdated, as they are based on the so-called 2D–3D dose planning. Only a small number of the studies were based on the IMRT technique, with which the alignment of radiotherapy is considerably more accurate. According to the study by Zelefsky and others (2012), the IMRT radiotherapy technique does not involve an increased risk for secondary cancer. In addition, in Wallis’ analysis, none of the studies had looked into the potential connection between the VMAT technique, which is based on the most advanced dose planning, and secondary cancers”, says Joensuu.

“With advanced radiotherapy techniques, the radiation dosages to healthy tissues, such as the rectum, and any potential side effects resulting from it are significantly smaller than with older techniques. Also in the summary analysis, the risk for secondary cancer was found to depend on the radiotherapy technique used”, Joensuu continues.

Outdated radiotherapy techniques are a likely cause for secondary cancers

Joensuu says that, in recent years, the Docrates Cancer Center has also adopted the SpaceOAR hydrogel that is injected between the rectum and prostate, and with it, the radiation dose to the rectum is decreased by approximately 70%, according to research.

“Based on this, we can conclude that, with modern radiotherapy and modern methods for preventing side effects, the already mainly theoretical risk for secondary cancer has been eliminated almost completely. Wallis’ analysis also found that interstitial brachytherapy does not seem to involve any risks of secondary cancer. Brachytherapy is one of the most modern radiotherapy treatments for prostate cancer. With it, radiation can be confined with millimetric precision to just the prostate. At Docrates, HDR brachytherapy is often specifically used for treating localised prostate cancer and, thanks to its many benefits, there is not much need to actively monitor low-risk prostate cancer.

One of the weaknesses of the studies included in Wallis’ analysis, according to Joensuu, is that none of the studies had looked into whether the men already had early-stage cancer mutations in their urinary bladder or their intestines before starting the radiotherapy.

“All in all, it seems that the potential risk for secondary cancers, which is apparent in the summary analysis, has to do with the outdated techniques of external radiotherapy.”