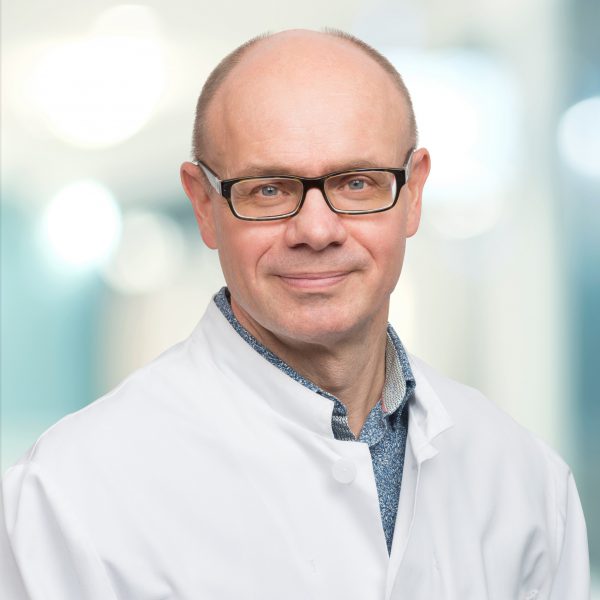 Specialist in Surgery and Urology
M.D.

Lauri Taipale is a third-generation doctor. He is a specialist in surgery and urology and has specialised expertise in in-tissue prostatic radiotherapy, i.e. High Dose Rate (HDR) brachytherapy and laser-based TURP treatment for benign prostatic hyperplasia.

The operative side and surgery have been obvious choices for Taipale, while urology offered an opportunity for specialisation. And Taipale has had no need for regrets; he has taken a liking to the field. In particular, he finds urology appealing because it is a small specialty with a very homogeneous team of colleagues and a wide spectrum of work, ranging from large surgeries to small outpatient procedures.

Taipale’s career includes patient work in both the public and private sector. From 2004 to 2012 he worked first as Chief of Department, then as Senior Ward Physician in Lohja and as a urologist in Hyvinkää. In 2012, Taipale returned to Helsinki to the University Central Hospital and later switched to radiotherapy for prostate cancer. At Docrates Cancer Center he holds his practice once a week.

At Docrates Taipale performs in-tissue HDR brachytherapy treatments. Brachytherapy is a team effort that requires not only a urologist and a medical physicist, but also an anaesthetist, a cancer specialist, a nurse anesthetist, and X-ray and nursing assistants. In Taipale’s opinion, deciding on treatment as a team and getting good outcomes of treatment are the best things about the job. That’s why Taipale says it’s a pleasure and an honour to be able to work with Docrates professionals. Docrates is a pioneer in HDR treatments.

Urology is a fast-growing specialty. In recent years, development has progressed exponentially with treatments developing at an tremendous pace. Even the doctor has a lot of new things to learn. In addition to his work, Taipale participates in national and international congresses. The main cooperation bodies are the European Association of Urology (EAU), the American Urology Association (AUA) and the Finnish Urological Association. These associations provide a very high level of education every year. In addition, Taipale participates in congresses and workshops on smaller issues. He also lectures to the public and colleagues in other fields. In the clinic, teaching bachelors of medicine is naturally part of the job description.

Taipale’s professional identity is solid, even straightforward, and he gets along well with patients. The treatment of cancer is often quite complex: the situation is dramatic for the patient and there are many things to go through when choosing a treatment. In order for the patient to understand all the details, Taipale strives to avoid “medical terminology”. Calming down the situation and telling things in an easy to understand way will build a relationship of trust. The aim is that the treatment negotiations and the actual treatments are conducted in good agreement with the patient.

Taipale really likes his job. He finds it rewarding on many levels, and he is happy to come to work every morning even though as a doctor he sometimes has to deal with difficult situations and human destinies. To do his best. The goal is to be a good doctor and stay on top of development. Working with the real experts in the field is motivating and develops one’s own skills. There are also many grateful patients along the way to encourage Taipale forward.

In addition to his family, a good sense of well-being and a tailwind in Taipale’s everyday life are provided by the gym and summer sailing. “If the kids still agree to some summer vacation sailing,” he laughs.