Radiotherapy has established itself as an effective form of prostate cancer treatment in the 21st century. In practice, many patients face an extremely challenging situation having to decide between therapy forms: the knowledge of one’s illness is difficult to cope with. At Docrates Cancer Center, we have invested in the optimal diagnostics, study and treatment of prostate cancer. When weighing up treatment options, it is particularly important that the diagnostic examinations and treatment recommendations are based on the latest medical and empirical information and controlled evidence. At Docrates, patients and their families are always the central focus when discussing the benefits and adverse effects of different treatment options.

High dose rate (HDR) brachytherapy is also used as a salvage therapy after prior external radiotherapy in the event of recurrence of the disease, because in HDR therapy the doses on healthy tissue can be kept at a low level. Salvage radiotherapy is a novel approach: previously, re-exposing an area to radiation was not considered rational and few related studies were published. However, publications related to salvage HDR brachytherapy have considerably increased in number and initial results are very promising.

HDR brachytherapy as a procedure

HDR brachytherapy is performed by a team including a urologist and a medical physicist well versed in radiotherapy technology and dose calculation. The team also includes an anaesthetist, a specialist oncologist, an assisting radiographer and an assisting nurse.

HDR brachytherapy is a method whereby 10–20 needles are inserted through the perineum and the prostate gland below the bladder. In a way, the prostate is pierced by several needles. The thickness of the needles is 1.5 mm.

The procedure is performed under general anesthesia or spinal anesthesia. The doctor draws the boundaries of the prostate gland at the dose planning station and determines the location of the urethra. The medical physicist then prepares the preliminary dose plan and determines the number and locations of the needles. Radiotherapy targets the entire prostate gland. However, dose planning takes into account any areas of prostate cancer verified though biopsies and imaging, and the team will try to maximise the radiation delivered to these areas. The needles will then be placed in their allocated locations using external coordinates. The insertion of the needles changes the state of the prostate gland somewhat. This will be observed by correcting the changes in the boundaries of the prostate and the urethra, as induced by the transition. Other healthy tissue that is sensitive to the radiation will be added to the drawing at this point at the latest, including the rectum and the bladder. The medical physicist will then prepare the final dose plan, which observes the actual location of the needles. When the dose plan has been completed, the line wires of the afterloading therapy device are connected to each needle. The iridium-192 radiation source will enter the needles through the wires and remain in each needle for a period of time in accordance with the dose plan, moving at 2.5 mm intervals under remote control. The longer the radiation source stays in one place, the higher the local radiation dose. The radiation session lasts 10–20 minutes. Once the session has been completed, the needles are removed and the bladder catheter is opened, and the patient is wakened and transferred to a ward for observation. The patient will stay the night in the ward. 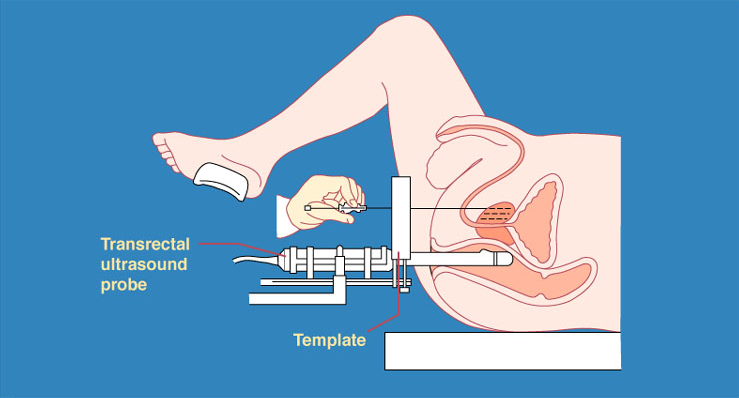 An illustration of HDR brachytherapy

Promising results with HDR brachytherapy in Finland and globally

International reports published in medical publications illustrate the effectiveness of the HDR technique in low-, medium- and high -risk patient groups. The renowned German HDR centre and radiotherapy clinic Offenbach has published a report covering the treatment of 718 patients. After HDR monotherapy, 95% of the patients were free from disease after 5 years of monitoring. A Dutch report published in 2011 showed that 97% of the 264 low- and medium-high-risk group patients were free from disease 7 years after treatment. The renowned New York based Memorial Sloan Kettering Cancer Center gave 199 high risk patients out of a total of 229 patients an extremely high dose of 199 Gy. A total of 81% of the patients were free from disease 7 years later. The combination of external radiotherapy and HDR therapy appears to be particularly effective in high-risk patient groups compared with using external radiotherapy as monotherapy. The adverse effects of the combination therapy are no more common or serious than those of external radiotherapy as monotherapy.

Docrates Cancer Center has performed the most HDR therapy in Finland. Our urologist, Martti Ala-Opas, is a pioneer in his field in Finland. Under Martti’s direction, over 1000 HDR brachytherapy sessions have been performed at Docrates with promising results. Currently, HDR treatments are administered by Lauri Taipale, a specialist in surgery and urology who has been a valuable asset in the Docrates HDR care team since 2015.